Three Really Big Deals (you may have missed)

Online video is now everywhere – mobile devices, over-the-top boxes (Roku, etc.), gaming systems and more. In fact, it’s become such a standard of everyday life that it may be hard to stay abreast of all the cool technology changes that have occurred in the past year or so. And it’s understandable – once broadcast TV became a household item, the technology essentially stood still for almost 40 years while we were obsessed with content: network shows, primetime, live newscasts, serials, stars – it’s no wonder the technology of the medium stagnated while we focused on the living room screen. 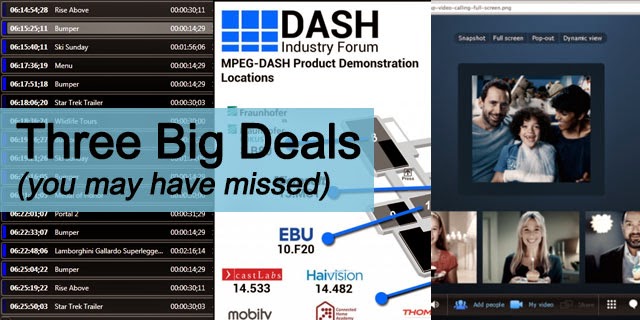 But the web is all about multitasking and parallel lines of development – so while we see more (and better!) content filling up our viewing time from sources we never imagined even five years ago (Netflix Originals, AMC, FX and a host of other new entries in the content space) – technology has continued to march forward on the background, even while this new parade of visual distractions keeps us focused on the now rather than the tomorrow.

Anyway, I spend a lot of time in this space – and I thought I ‘d take this opportunity to offer up my Top Three Technologies that you may have missed while watching Game of Thrones or Sons of Anarchy. Here’s the list (and why they’re important):

1) http://www.broadcastplay.com/ - At first you might say “what’s the big deal about THIS?”, but it’s really a game changer. Previously, the ability to manage large amounts of content in a real-time, scheduled environment was limited to Broadcast and Cable Facilities operating giant, expensive “playout” machines. Well, you may not have the content – but now everyone can be their own TV station complete with scheduling, commercial insertion, graphics overlay…all for around $400. Ok, while it’s true that no one might want to watch an endless channel of your home movies and cell phone clips – it feels good knowing you can do it! For those who don’t have the OTHER end of a broadcast facility lying around their backyard – there’s http://www.uniplay.tv/ who feature Unistreamer Lite for around $600 which allows you to create a 24 hour-a-day channel (like the Broadcastplay folks) AND sends that stream directly to YouTube Live or a myriad of other live streaming services. I can’t personally vouch for either of these products as I simply don’t have enough compelling video clips to put them through their  “24 hour” paces – but someday…

2) MPEG-DASH – Another geek-only term that will really change the streaming / online industry. Already embedded in many current streaming platforms, MPEG-DASH stands for Dynamic Adaptive Streaming over HTTP. What does this really mean? It means that the bandwidth / size / device / operating system nightmares that have plagued streaming video in the past are coming to an end. This open-source, player agnostic codec allows you to stream over HTTP – the same protocol as web pages while taking into account network issues – so your cell phone isn’t trying to play back a file encoded for HD playback on the big screen. This will make people’s lives a better place to be – and perhaps, one day in the distance future a small child will ask “Mommy, what’s buffering?” .

3) WebRTC – This is the killer technology you’ve never heard of, simply because many people just don’t know it’s there. WebRTC stands for Web (like internet, right?) Real-Time Communications – which essentially means that the video conferencing industry had better find something else to do. It seems Google bought a cool company that had a browser plug-in (think app for your browser) that allows browsers to talk to each other using VIDEO directly – without going through a bunch of encoding and de-coding and streaming servers and voodoo. And in their wisdom, Google just gave it away. They made it part of the Chrome browser environment so it works really well on PCs running Chrome and Android devices. It also works on some other lesser browsers but still hasn’t been adopted by Internet Explorer or Safari (even though the end product resembles Face-Time on an iPad) – BUT industry pundits say it’s only a matter of time.

So you can now run your own automated, 24-hour-a-day television station that doesn’t buffer while videochatting  directly with your friends through a chrome browser. Is the future a great place or what?

Posted by Jock Mirow - BroadbandVideo, Inc. at 9:41 AM

Check Out This Stuff!

Jock Mirow - BroadbandVideo, Inc.
Jonathan “Jock” Mirow - Mr. Mirow is a founding partner / CEO with BroadbandVideo, Inc. dba Warehouse38.tv / BroadbandSEO.com. Mr. Mirow began his career in the newspaper and publishing industry before becoming Manager of Creative Services at Jones Intercable and later at United Cable of Colorado. He served as Art Director at both Fox31 and UPN20 and subsequently joined America Online as the Senior Producer for Digital City Denver where he ran the creative and production departments. Following his role as Senior Creative Director at MapQuest.com, he was instrumental in the creation of the broadband creative services department at MediaOne, which designed many video-on-the-web prototype applications. During the late 1990s and early 2000s, Mr. Mirow was involved in the creation of some of the first User Generated Video Content sites - including MyWitnessNews.com and ItsActive.com. Mr. Mirow co-founded BroadbandVideo.com, an early video content management system company. BroadbandVideo.com has evolved over the last ten years under Mr. Mirows' guidance to a full-fledged online video production facility / live webcasting studio and Search Engine Optimization powerhouse.